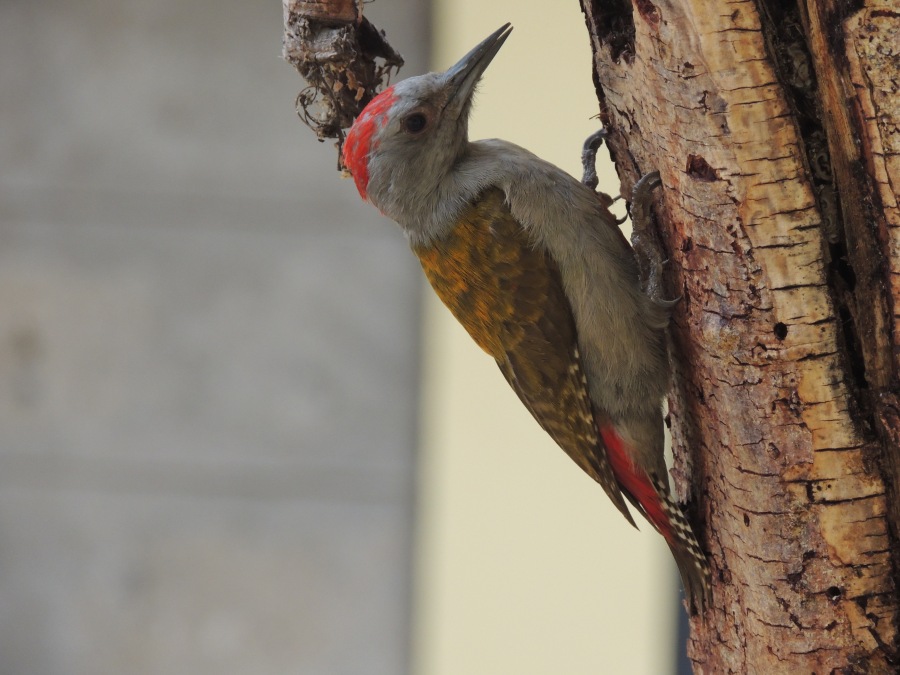 Our bird of the week  is the Grey Woodpecker, race rhodeogaster, which is sometimes considered conspecific with the Ethiopian spodocephalus and known as Grey-headed Woodpecker. This species species was photographed around central Kenya.

In Kenya we have 13 species of Woodpecker and they are amazingly beautiful to watch in the field. Most of the woodpeckers we have here are diamorphic, meaning male look different from the female. 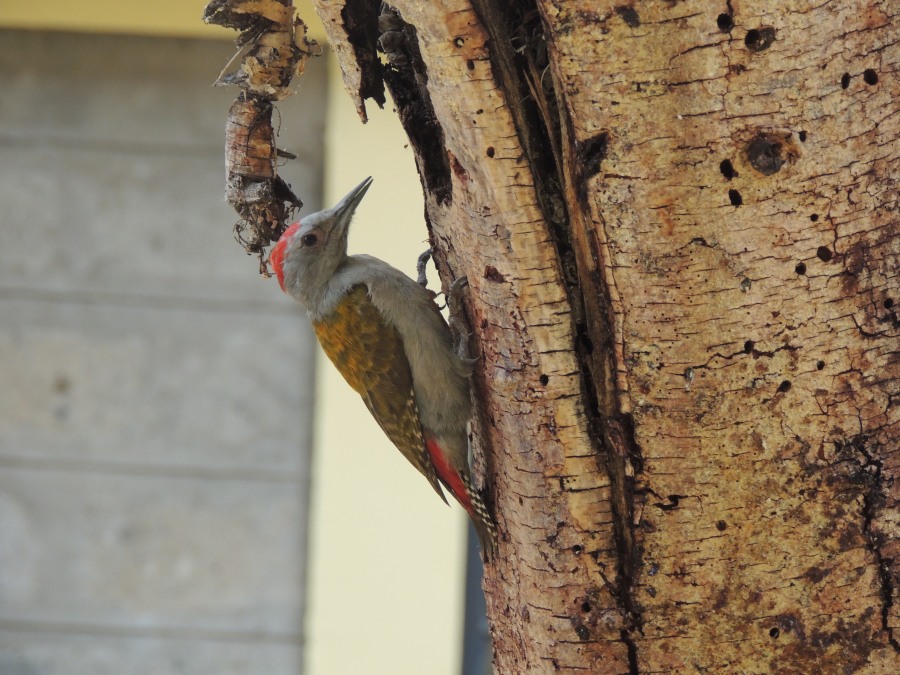 Woodpeckers are known for tapping on tree trunks in order to find insects living in crevices in the bark and to excavate nest cavities. Woodpeckers also have, well, a head for pecking. For one, woodpeckers have tiny brains—just 0.07 ounce. The bigger the brain, the higher the mass and thus the higher the risk of brain injury according to biologist research work, hence the reason why woodpeckers don’t get a headache while pecking.

The woodpecker’s strong, pointed beak acts as both a chisel and a crowbar to remove bark and find hiding insects. It has a very long tongue, up to four inches in some species – with a glue-like substance on the tip for catching insects.

While most birds have one toe pointing back and three pointing forward on each foot, woodpeckers have two sharply clawed toes pointing in each direction to help them grasp the sides of trees and balance while they hammer – this formation is called zygodactal feet. Many woodpecker species also have stiffened tail feathers, which they press against a tree surface to help support their weight.

Woodpeckers live in wooded areas and forest where they tap on tree trunks in order to find insects living in crevices in the bark and to excavate nest cavities. Some species drum on trees to communicate to other woodpeckers and as a part of their courtship behavior. Woodpeckers tap an estimated 8,000-12,000 times per day.

Buff-crested bustards are small in size compared to other species that we have in Kenya. They are cryptically colored to help them blend into their environment. They also are sexually dimorphic. Male buff-crested bustards have an olive colored crown, a black stripe down the front of the neck, and a black chest and belly. The upper feathers contain light orange-brown coloration. The females have brown heads, a much reduced crest, and are buff colored in the throat, chin, and breast area.The buff-crested or crested bustard prefers drier acacia scrub and woodland of northern arid and semi-arid regions of Kenya, especially in regions like Samaburu and Meru National park, Lake Baringo and Bogoria  and further north in areas like Kapedo.