This is species is  is well distributed in  in eastern part of Kenya , commonly seen in places like Samburu and Meru National Park, Tsavo East and West , and if you are lucky enough to Tarangire National Park, then you are absolutely sure of spotting it in the big Baobab trees the park is known for.

For the last two weeks, a pair of White-browed Scrub Robin have been nesting very close to my house! I have been observing them carefully and indeed I am impressed by the intelligence!!The timing of the breeding period is incredible, in the middle of a big rainy  season  and there was plenty of insect, which meant the young one will not go hungry  and I supplied them with a bath bowel in form of a modified stone which they like it a lot.The good news is two days ago, the eggs were hatched and  two chicks with a bright cream- white gape.This morning when I visited them in the nest, the chicks were developing fast and their tiny bodies were covered by feather.I wish them well as they continue with their parental responsibilities which up to now, they seem to be doing it perfectly.

Red-backed Scrub Robin, as this species is sometimes refered Lives mainly in the woodlands and savannah with thickets and tall grass. Fairly common resident in much of arid and semi-arid areas of East Africa. This small bird is light brown with darker streaks above. The rump is bright brown to orange; the tail is blackish tipped with white. Below it is white streaked with black. The eyes are reddish brown, the bill blackish brown and the legs and feet are pinkish brown it nests from September to January in building a bulky cup of course material near the ground in a grass tuft, shrub or thick clump of vegetation. The cup is lined with finer material. It usually lays three eggs, which are coloured white spotted with light brown and grey. Will foraging for its prey on the ground and takes insects in flight. The food consists of insects and spiders as well as berries and nectar.

Crimson-rumped Waxbill is a typical firefinch type of a bird who most of the time prefer spending its time within the grass top close to wetland habitat.The photo above was taken in Teddy bear Island at Lake Baringo. A Red-rumped waxbill has a slate-grey or black bill. This species is monomophic. Adult bird is warm brown above, with indistinct narrow barring;rumped and upper taile-tailed coverts red;tiled dusky brown, with central feathers tinged crimson, as are the wing-coverts. Broad red streak from bill through the eye. Juvenile bird is similar to an adult bird but lacks red streak through the eye.

The Northern White-Faced Scops Owl is a smallish owl easily recognizable by its very striking white facial disc, with a border of black plumage. It has large, bright orange eyes, which are also surrounded with black. (Juveniles have greyish plumage on their faces, and their eyes are yellow). These owls have prominent ear-tufts. Bigger than the Scops Owl, they are on average 25cms in height, weighing around 200gms. The feathers of their upper parts are mostly pale grey: their under parts are lighter and more streaked. The female of the species is larger than the male.Like so many other species of owl, northern white faced scops owl is a nocturnal. In Kenya they are found in Samburu and Baffalo springs  National reserve , Meru National Park, Kerio Valley, Lake Baringo and Bogoria .

This species is found singly or in pairs. The female will lay a clutch of 2 or 3 eggs in the old stick-nests of many other bird species, including small raptors such as goshawks and kites – or even herons, dove or crow’s nests. If these are not available, they will nest in natural tree holes. The 30 day incubation is mainly by the female, although the male may assist. Young chicks will start to fly at roughly 33 days, leaving the nest area two weeks thereafter.

Crested Guinea fowl has a wide range in Kenya and northern Tanzania. In Kenya it is found mostly in western tropical rain forest remnant of Kakamega forest and Lake Manyara national park in Northern Tanzania, Body plumage is much like a typhical Guinea Fowl, with whitish spot; most recognizable features is the short, curly “mop” of black feathers on the head, the rest of the head and neck are bare with blue skin, red skin arond the eyes and on the neck;eyes are red;legs dark brown to black.The species is mono morphic.

Golden-winged Sunbird has a bright yellow tail and wings, the shoulders are dark gray, the dark gray extending to the nape and throat, while the head and downturned beak are lighter gray. The tail is long and ends in two long, very narrow parallel feathers.These birds are found in East Africa; Kenya, Tanzania, and Uganda.Golden-winged sunbirds live in grassland, bamboo thickets, and tropical mountain forest.

In Kenya this species if found in Lake Nakuru and Naivasha,Nyahururu,Mt.Kenya and Aberdare National Park.

The sandgrouse are distributed across northern, southern and eastern Kenya, Specifically in desert and semi-arid areas of Samburu, Meru, Marsabit, Turkana,Lake Baringo,Tsavo west and east, and Amboseli

Sandgrouse have compact bodies, but small, pigeon-like heads and necks. The different species range in length from 24 – 40 cm and weigh from 150 – 500 g.

Males and females look alike, Some species are also polymorphic .

They have long pointed wings and short legs that are feathered down to the toes, and members of the genus Syrrhaptes also have feathered toes.

Sandgrouse mostly feed on seed and are often seen in large feeding flocks with up to 100 birds.

Sandgrouse are monogamous (form life-long pair bonds). They make their nest on a slight depression in the ground. The average clutch consists of 2 eggs, occasionally up to 4. The male and female share the incubation duties; with the male incubating during the night and early mornings, and the female taking over during the day.

The young hatch after about 20 – 25 days; and are able soon able to leave the nest.

They are able to feed themselves from the day they hatch, but have to learn foraging skills from their parents for several months. 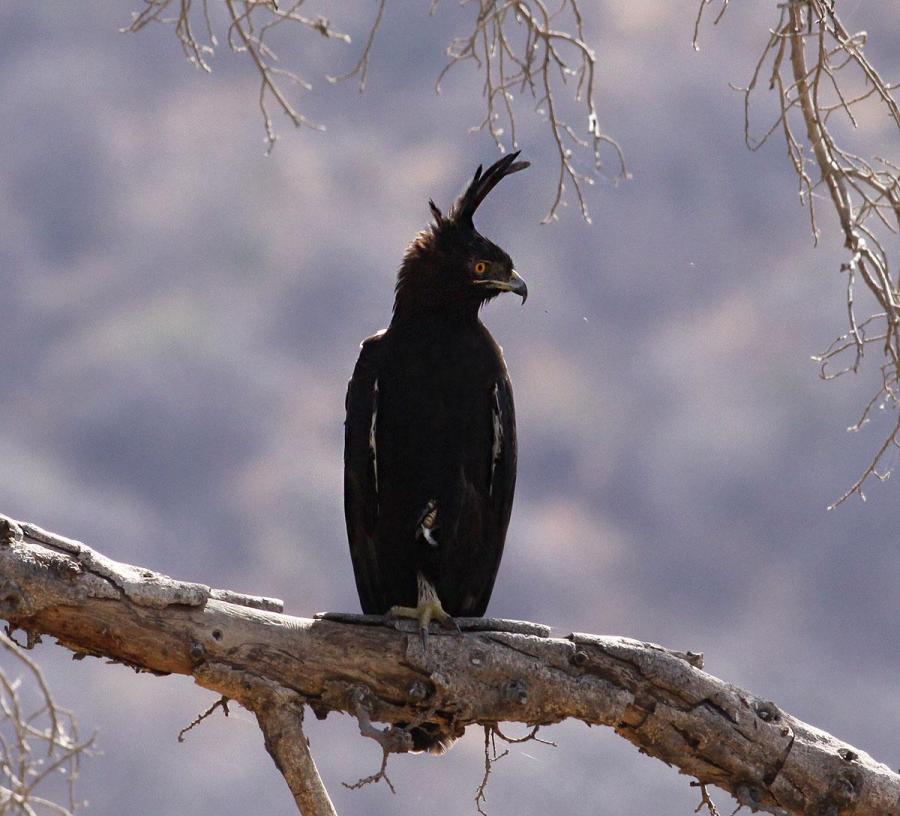 The adult Long-crested Eagle is overall very dark brown or black, except for white patches at the joint of the wing both above and below, white under-wing coverts spotted with black, a white base to the tail and greyish brown tarsi. The eyes golden to reddish brown, the cere and feet yellow.
Immatures can be distinguished from the adult by the whiter tips of the neck feathers, the less prominent crest, and a generally more mottled appearance. The eyes are dark olive-brown, the feet and cere pale ochre-yellow. 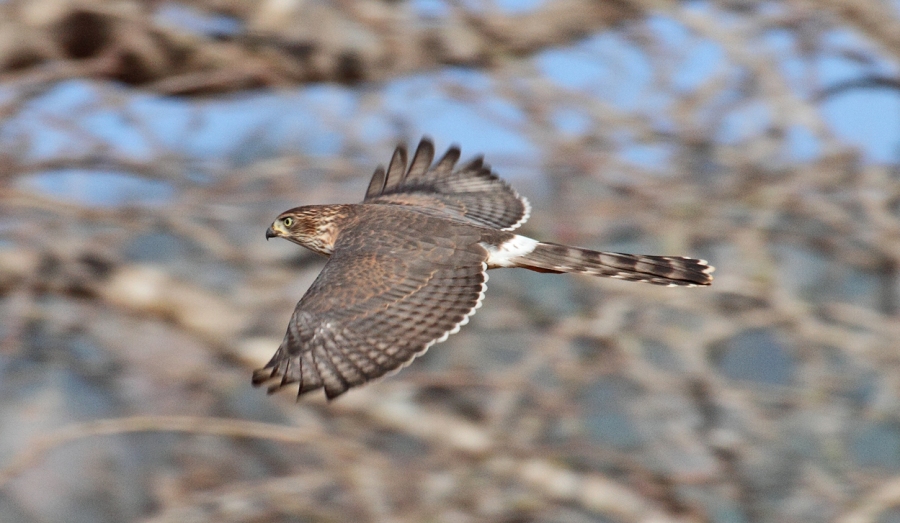 Gabar Goshawk is smaller than other Goshawks. We can observe two morphs, one grey and one almost black. This melanistic form represents about 6 to 25 % of population. The photo shown above is of a juvenile bird.

Gabar Goshawk lives in savannahs and semi-arid scrub with scattered trees. It avoids too dense forests and driest deserts. It is rather found in drier thorn savannah, and also along watercourses.In Kenya it is commonly seen in Lake Baringo and Bogoria, Tsavo West and East National and Samburu National Reserve.